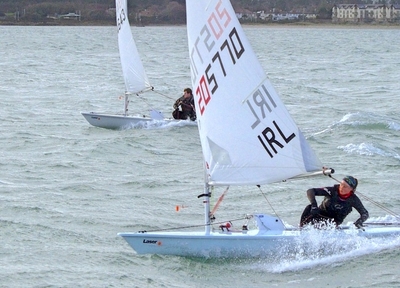 The Laser Frostbite series continued today with two races consisting of a triangle/sausage, sailed in west – south west winds of 20 – 25 knots.  The Windguru forecast of 34 knot gusts seemed to deter several sailors, there was a relatively low turnout of 11 boats; nine full rigs and two Radials, the 4.7s was cancelled.  There were a few retirements due to gear failure in the first race, however, the remaining boats enjoyed the fresh conditions with a small number of capsizes in the mild weather.   The reaching angles allowed for some great planing, reminding us of why the Laser is such fun in a breeze.

Both races got clean away at the first attempt despite the flood tide.  In race one Ronan Cull, back from foreign shores, showed he has lost none of his pace and was a clear winner ahead of Daragh Kelleher and Stephen Quinn (using his disposable sail).  Aoife Hopkins displayed her usual heavy weather skills by coming third on the water.   In the second race, it paid to go right on the beat probably due to an early ebb tide inshore.  Ronan Cull was in the lead again until he decided to attach his boat to the weather mark on the second rounding (the ebb tide again).  The manoeuvre let Daragh Kelleher take the lead which he held until the finish.  Ronan recovered to take second place just ahead of Darach (one R!!) Dineen.  Aoife was fourth on the water as first radial.