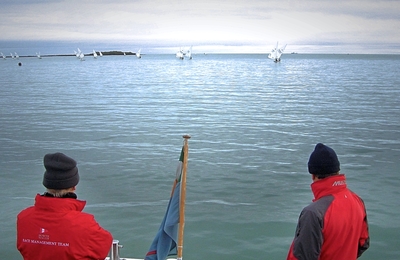 Laser ‘Frostbiters’ were back at it this Sunday for the first race post Christmas in mild temperatures and  a SE breeze ranging from 3 - 5 knots. Before the start, Troy Hopkins (007) claimed the unwelcome honour of first capsize of 2017 and, to ensure it was seen by all, pulled the boat up and dumped it in a second time from the opposite direction.

A combination of the very light winds and an ebb tide lifting the fleet over the start line resulted in a general recall for the Full Rig Lasers. The recalled start saw a black flag and it produced a clear restart with all boats cleanly away. The boats that went left up the beat did best and, possibly invigorated by his swim, Troy was first boat to the windward mark. In the falling breeze the second reach against the tide turned into a hard fought battle between Darach Dineen, Paul McMahon and Robert Eason with Dan O'Grady close behind. Robert got to the leeward mark first and held on to take the gun from Darach when the race was shortened after just one lap. Daniel Hopkins pipped older sister Aoife for first place in the Radials, Aoife will certainly be looking forward to breezier days to exact her revenge. Ella Hemeryck took first place in the 4.7s, having opened a considerable gap on runner-up Dylan McEvoy. The wind then failed completely and the second race was abandoned.