Leaders emerge with two weeks to go of Laser Frostbites 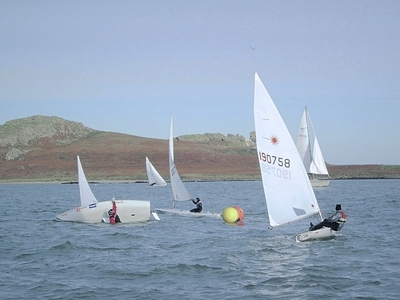 There were near perfect sailing conditions for the fourth Sunday of racing in the Laser Frostbite series. The first race started in 19 knots of breeze from 120 degrees, while the wind eased somewhat to 14 knots for the start of race two.  There was close racing throughout the fleet with 20 full rigs, 2 radials and 7 of the 4.7s fighting it out.  The first race got away cleanly with the flood tide holding the fleet back from the line.   There were high hopes of no general recalls for the second race this week, after several recalls last week....alas, by the time of the second started, the slack tide was no longer an influence and the competitors were feeling braver / more competitive leading to another general recall.  Code flag U was needed to enforce enough caution to get the start away at the second attempt.  It has to be reported that the 4.7 sailors are showing great patience week after week as they wait calmly for the full rigs & radials to get a clean start!

In the standard fleet, Daragh Kelleher and Paul McMahon fought it out for first and second places with Paul getting the edge in both races.  Third place in race 1 went to Conor Murphy and the second race; ‘bronze’ went to Stephen Quinn in a tight battle with Dan O’Grady and Darrach Dineen.  The fair conditions meant there was a minimum of capsizes, that said, Dave Quinn did manage one at the windward mark in race 2; right in front of the committee boat so the event is captured for posterity in the photo gallery.  Paul and Daragh are fighting it out for the top spot in the overall winter series with Mr. McMahon having the edge at this stage on 9 points, Daragh has 13.

Shane O'Brien, who is sailing very consistently in the series to date, won the two Radial races.  Shane now has a very strong lead on 12 points in the overall series ahead of the nearest rival Aoife Hopkins (26 points).

In the ‘patient’ 4.7 fleet, Eve McMahon won both the races and was well wrapped up in her 'bank withdrawal' gear (see photo gallery).  In the first race there was an all-female top three with Emma Gallagher and Aisling Kilmartin in second and third.  Race two delivered second and third to Dylan McEvoy and Jack McMahon respectively.  Eve has sailed an excellent series to date and now has a 12-point advantage ahead of her nearest rival Sam Crawford.

Only two more Sundays remain before the Christmas break, the leading places are taking shape in each fleet, although there is still plenty of sailing for others to make a mark as the discards to kick in.

See photos in the Gallery here