Brass Monkey competitors get a taste of winter sailing 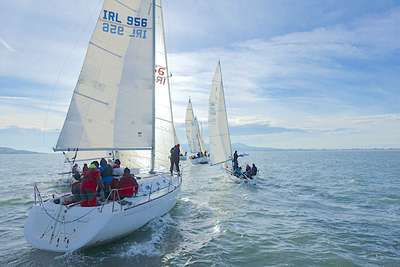 A frosty marina greeted the Brass Monkey sailors this Sunday as they came to the club in early light and they had to be careful first on the marina and then on the decks of the 35 keelboats that are taking part in this very busy event that is once again being generously sponsored by The Brass Monkey restaurant.

Pat Connolly and his team have put together a schedule of 6 weekends and following a string of the traditional Sunday races, this series will conclude on Saturday 10th December. Faced with a forecast of bitterly cold northerlies, the crews were well prepared with warm clothes, hats and gloves the prerequisite for enjoying the morning. And enjoy they did, in bright sunshine and a 12-14 knot westerly - slightly less severe conditions than the forecast.

The Brass Monkey's handicap system is legendary and anyone who thinks that they will have any semblance of understanding about how results might transpire is better off not attempting to decipher the code. It is an enigma indeed and only the inner sanctum of the organising committee have the key. That key locks in the spirit of the event, which is one of participation and fun for all of the wide range of sailors (in age and ability) and with the well-known understanding that you only need two boats within sight of each other to induce crews to turn a leisurely cruise into a race, this event always brings the competitor out in the sailors. In years gone by, the competition extended to 'the best morning fry', when seasoned sailors such as John Doran, Liam McGonagle, Micheal Fleming and Lorna Townsend would try to impress a visiting crew with the best-cooked Superquinn sausages, black pudding and bacon breakfast. The following week there would be an attempt to usurp the victor using underhand tricks such as gourmet sausages or perhaps even the offer of some 'manners' in the morning coffee.

Those competing on Sunday last enjoyed tight racing on a busy course - all the better to keep crews warm, indeed many of the helms seemed to feel the chill more than their busy crewmates. Whatever about their helmsman, there will surely be an award at the end of the series for Kodachi's Sam O'Byrne, who had to dive below the water after the boat's bulb-keel snagged on the Cush Mark!

Following the cancellation of the very first race 2 weeks ago, this Sunday saw the second race of the series for the three competing classes. Stephen Harris and Frank Hughes' Tiger leads Class 1, Paddy Tyne's Maximus and the Bourke/ McGirr/ Ball Xebec share top spot in Class 2, while Class 3 is led by the irrepressible Club Shamrock Demelza. But a word of warning needs to go the leaders, rest not on your laurels because the handicapper is holding the key.

The event continues next Sunday....

(Top photo by Conor Lindsay shows the Class 2 start. Conor has a super set of photos in the Gallery)