Three in a row for Michael O'Connor on 'Sin Bin' 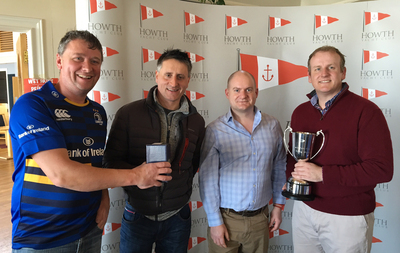 The 2016 Spring Warmer series came to a conclusion at Howth Yacht Club on Saturday. The event was once again very kindly sponsored by Key Capital Private. The final Saturday felt more like a Frostbite morning with temperatures at about 2 degrees and snow visible on the Dublin mountains. However, the crews did have a nice breeze of about 16 knots and glorious sunshine to start the day and get the first race under way. The race committee under Richard Kissane’s and Rupert Jeffares experienced eyes were hoping to get three races in to make up for the race lost the previous Saturday.

In the Cruiser Class Stephen Quinn’s Lambay Rules took the honours on countback by virtue of their one race win from Paddy Gregory and Don Breen’s Flashback. In third place was Dave Kelly’s King One looking absolutely fantastic after a “rebranding” and a Winter of hard work.

The J24 racing was dominated by Howth’s K25 team in Kilcullen with a clean sweep of three first places. It was great to see two other youth teams out on Brian McDowell’s Scandal and Johnny Bravo, Howth's other K25 team who came in second and third places respectively.

The SB20 fleet was the largest fleet with 11 boats and they also ran a coaching session around the event under the watchful eye of top coach Mark Rhodes. Michael O’Connor took the win for the third year running from Shane Murphy on the newly named Two Men and their Monkey. In third spot was Ger Dempsey and Chris Nolan on Venuesworld. In fourth was Dave Barry’s Lia.

The prize giving took place with Vice Commodore Emmet Dalton on hand to present the prizes. Shane Gill of Key Capital Private was unable to attend but expressed Key Capital’s delight at being able to support Howth Yacht Club and Irish sailing.