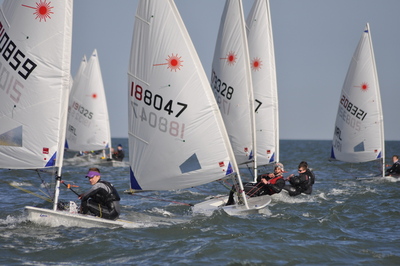 ISA Youth Pathway National Championship 2016, in association with Bentley and Aston Martin - Howth Yacht Club hosted the ISA Youth Pathway National Championship and Optimist Trials over the four days from 31st March to 3rd April in varied conditions. The regatta attracted 192 entries across five classes, from all corners of Ireland (Plus a visitor from Italy) and produced Champions from seven clubs.

Thursday's racing was delayed while the wind found time to behave and steady itself. The fleet wasn't too unhappy to wait in the glorious Spring sunshine before getting proceedings off. In the 420 Class, local favourites Elmes/O'Sullivan had it their own way with two bullets. The Laser Radial top spot was shared by O'Beirne (RStGYC), Durcan (RCYC) and Nicole Hemeryck (NYC). Over on the Topper course, the RStGYC was again dominating, with Jack Fahy burning up the course. Rush's Ross Morgan was definitely in
a hurry on the Laser 4.7 course, leading by 6 points after Day 1. By the end of the day, the wind had picked up and a lot of tired faces reached the top of slipways, concentrating on the next race...to their dinners!

Day 2 fell victim to the elements, with strong and increasing winds keeping the fleet ashore. Principal Race Officer, Derek Bothwell, was cheered by the competitors as he announced a day off. Cinemas and shopping replaced the usual windward mark targets.

With a window of opportunity in the weather, the fleets headed afloat on Saturday, hoping to catch up on the schedule with a few additional races. On the 420/Laser Radial course, four races were crammed in, suiting Malahide 420 duo Gemma and Cara McDowell. The sisters closed the gap to the leaders and ended the day only a point adrift of Elmes/O'Sullivan. Radial and 4.7 gurus O'Beirne and Higgins never fell onside the top three for the day. On the Topper course, Carroll was fighting off a strong challenge from another Hemeryck, this time Ella who was only a couple of points behind. Almost a carbon copy of Day 1, Saturday saw some tired bones come ashore!

As the sailors were chasing around the race course, members and visitors did loops of the Peninsula in some spectacular cars, presented by Aston Martin and Bentley. Our friends in Charles Hurst Motors spent a day showing off Vantages, Continentals, Rapides and, ideal for the Circuit Sailors, the new Bentley Bentayga. Rarely has the clubhouse been so full of grinning faces on a rainy day!

Going into the final day, titles could have been won or lost, testament to the incredibly close racing across a range of conditions. At the end of the day, the Champions filtered to the top and were presented with their medals by ISA President David Lovegrove and cheered by their fellow competitors.

Special thanks must go to the Race Management Team under Race Officers Derek Bothwell, Richard Kissane and Harry Gallagher (Optimist Trials). Course Marshall Brian McDowell who kept everyone safe and sound. Beachmaster, Charles Blandford and his team, who ran a tight operation ashore. The Race Office run by Alice Kissane and Orla Sweeney. Lastly, but by no means least, our appreciation goes to the Protest Committee, lead by Ailbe Mellerick, who spent the regatta afloat in some unkind conditions.

The Optimist trials took place in HYC over the weekend and 11 races were completed. Race officer Harry Gallagher and his team ran an excellent series which was eventually won by Harry Bell a junior member of HYC and RNIYC. This important event of the annual Optimist calendar is used to decide the sailors who will represent Ireland at the Optimist world, European and French Championships. Well done to all who took part.