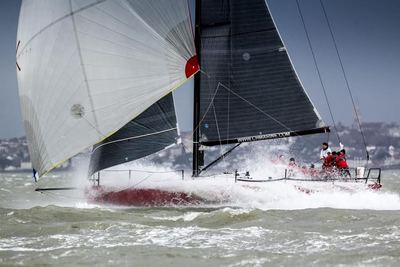 Ross McDonald and Dylan Gannon raced on Anthony O’Leary’s Ker 40 Antix last weekend.  Antix was part of a fleet of 10 in what was the inaugural "Fast 40+" regatta, although just a warm up for the full summer season which lies ahead.  With five new boats on the water for the first time and three with only a year under their belt, only two teams could be called ‘seasoned veterans’.  Girls on Film, a new build Carkeek Mark III, only hoisted their spinnaker for the first time at the first mark of Race 1 and showed remarkable skills over the weekend considering the conditions, helped by the considerable Category 3 talent on-board.  The new class rules allows for 5 Cat 3 sailors (professionals) to sail aboard each boat, an allowance accepted by nearly all boats.  However, 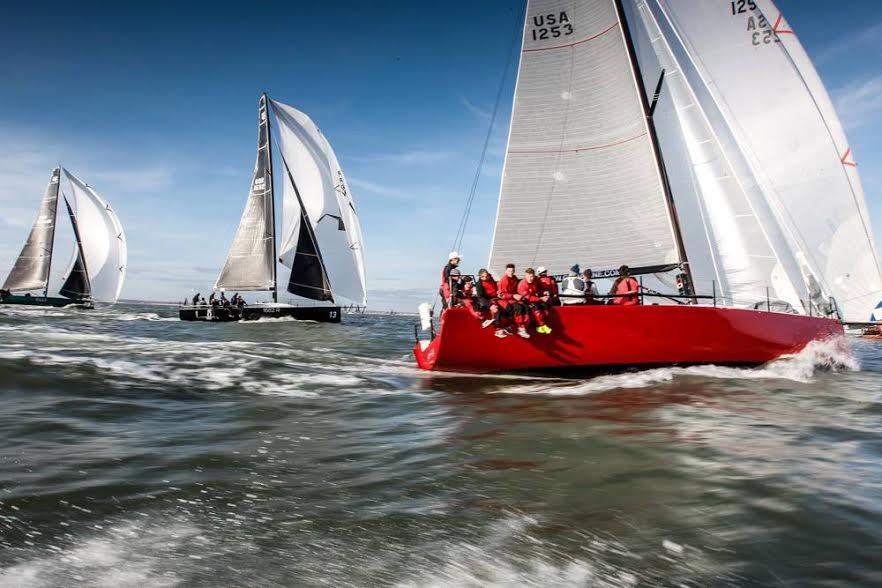 Antix retained her regular crew and went toe to toe with the pros, as she will have to do all season.

Friday's racing got off to a good start. With the wind in the early to mid-teens, some of the lighter fast 40's were already planing downhill.  The racing was incredibly tight with six boats finishing within 60 seconds on corrected time.  It was clear that small gains would make big differences on the score sheet.  As the wind freshened for the final race of the day, Antix mixed it mid fleet on the water and, as the lowest rating boat in the class, posted a fourth to add to her earlier nine and eight in what is a no discard event.

The weekend’s forecast was for a lot of breeze and it did not disappoint.  Saturday was a reaching start, turning downwind after a few hundred metres. Two sail reaching in 22+ and knowing that more wind lies at the bottom of the racecourse, the fleet launched their spinnakers and streaked away from the first mark all punching speeds above 20 knots as they slalomed their way west on the Solent.  Antix again placed well on the water after 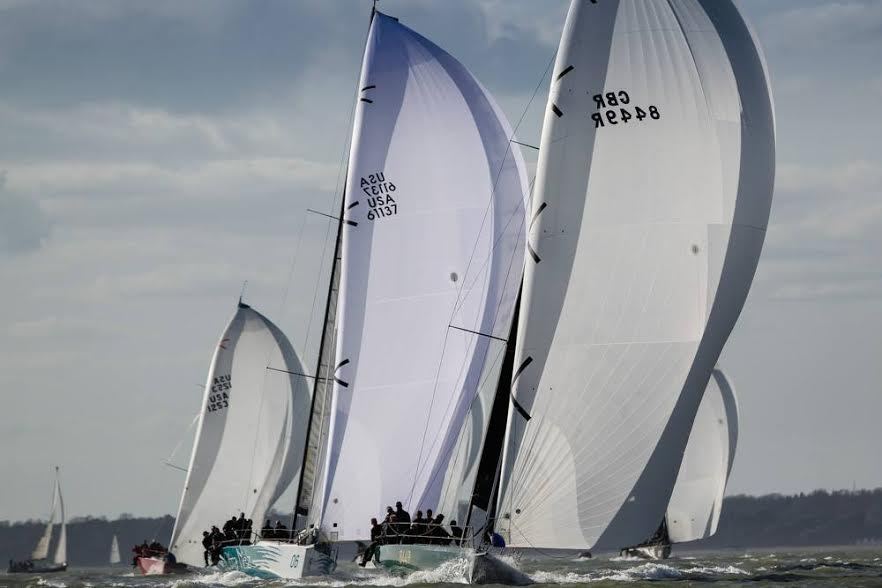 particularly strong upwind performances, opting for a J4 where the majority of the fleet had decided on J3’s.  Another 4th place but things were improving for Antix as she inched her way up the leader board.

On Sunday, the forecast didn’t disappoint and racing began early in +30 knots.   The Fast 40’s started in Osborne Bay, once again on a reach.  With lots of boats choosing different sails, the class exploded down the Solent, much to the delight of the multiple media ribs who struggled to keep up with the boats as they lit up.  Tokoloshe II were first to pop an A5 and rocketed ahead, while just to weather of Antix, 42 South broke their bobstay and prodder during a wild wipe out, while Rebellion, a Carkeek Mark II, launched their A6.   Antix went with an A3 and held her height to the turning mark, averaging speeds of between 22 and 23 knots the whole way and turning the boat into what looked like a submarine which was either about to dive or at times surface.  It was the right sail though, as the majority of the remaining boats got dragged too low and had to drop early and fetch up to the turning mark.

On the final downwind leg, the breeze blew into the high 30’s, with reports of up to 38 knots being seen.  Antix was mid fleet on the water and right in the mix on corrected time.  While doing +22 knots of boat speed, one of the gusts snapped Antix’s kite sheet and she was forced to drop her kite and 2 sail the remaining mile to the 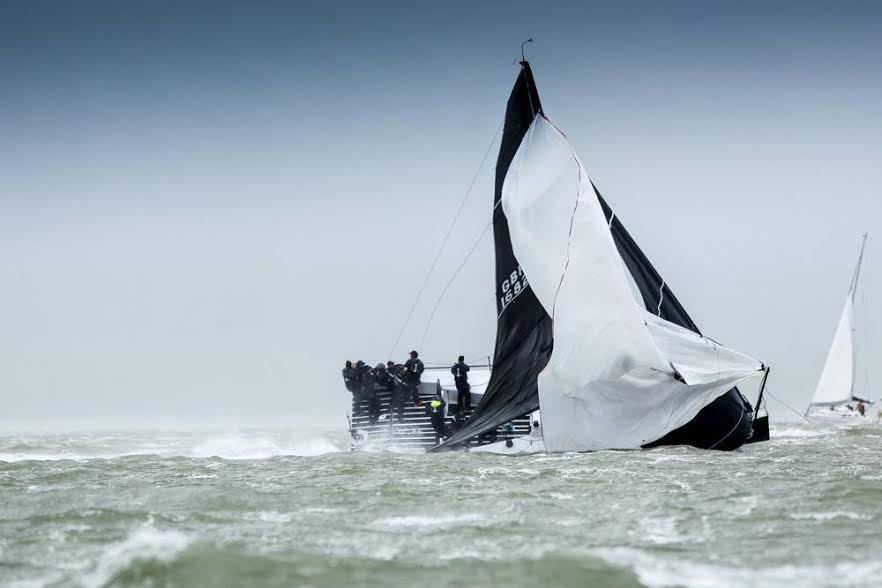 leeward mark, still averaging about 16 - 17 knots.  Little did the Antix crew know at that stage, the blown kite sheet was a blessing in disguise.  Unbeknownst to the Antix crew, who by their own admission “had a bit on at the time and weren’t doing too much looking outside of their own boat”, the rest of the fleet was having trouble of their own.  Tokoloshe II with a big spill, broke their prod and ended up doing a tender drop thanks to the RORC rib that was nearby.  Ino, a GP 42, with Irishman Darragh Burns aboard, lost a crew member overboard in what was one of two man overboards during Sunday’s hectic race.  By the time Antix rounded the leeward mark, she was 3rd on the water and well ahead of the leaders on corrected time.  To add to their fortune, those having problems were having such serious problems that they were retiring and heading home one by one.  Antix went on take the final race and beat the British boats on their own patch, on the anniversary of the Easter rising, which particularly pleased the crew.

Next on the Solent Calendar is the Warsash Series which takes places over the second and third weekends in April.  Warsash will serve as the final warm ups before the Fast 40 season kicks off ‘proper’ with the Vice Admirals Cup in May.  A full list of the calendar and some more information on the class can be found here.

Hat tip to HYC's Laura Dillon who won her class IRC 4 helming the S&S 41 Winsome.  Also on board was Howthie John Coffee, who hopes to get back on the water this summer and involved in the action on the Solent.  Winsome had a significant weight advantage over the smaller boats in her class in the windy conditions. 11 tonnes vs the lighter quarter tonners that were in her fleet!! The weight range was not all extreme however, as there were Sigma 38s, X332s and J97s also in IRC 4. 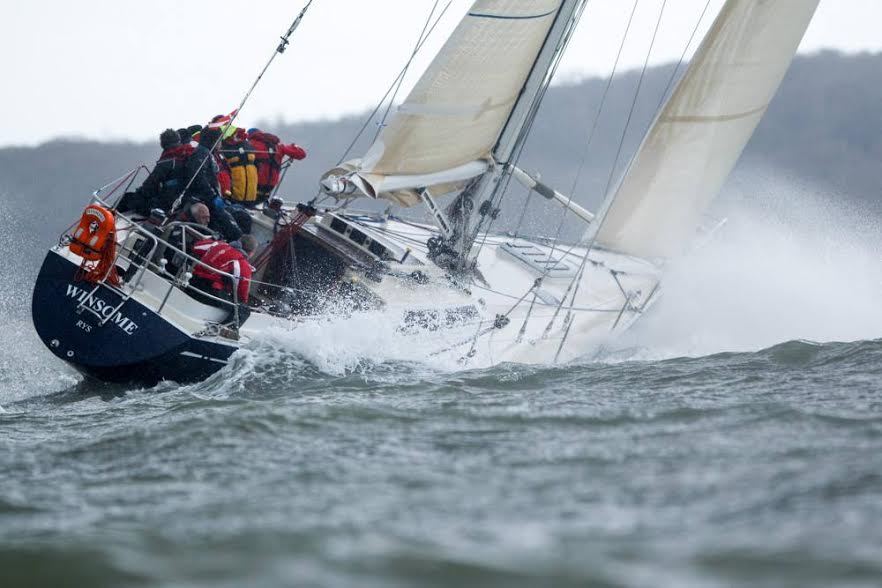