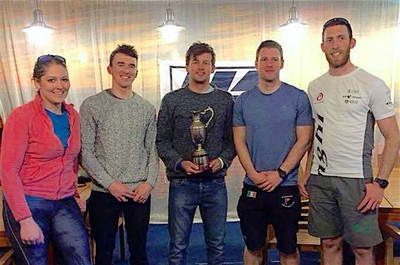 After two days of close racing in a whole range of conditions, Ryan Scott and his Howth Yacht Club K25 team of Sam O’Byrne, Luke Malcolm and Gordon Stirling have defended their title as Irish Match Racing National Champions! On their own media channels, the Irish Match Racing Association expressed ‘huge congratulationas to them and to all of the teams that competed.’

The event was run by Ellen Cahill in the Royal Irish Yacht Club over last weekend, utilising the ISA Sailfleet J80s under the bosun stewardship of Ush Hamilton. Ellen with her race committee and jury ran an excellent event and the interest in it has revitalised Irish Match Racing who are planning a number of events in 2016.

This was a great result for the HYC K25 program that finished 2015 with 3 National titles to their name and now heralds a superb start to 2016. The K25 Team are also proud to announce a new sponsor for 2016 in Ireland’s Eye Knitwear, a company that have previously supported the team at many fundraising events since the announcement of this very successful program in 2010.