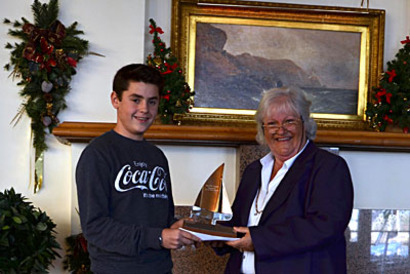 Commodore Breda Dillon presents the GM Trophy to Sam Markey - as 'the junior member who most embodied the spirit of junior sailing' during 2013.

The top award 'Boat of the Year' was presented to Euro Car Parks Kilcullen; richly deserved for a year of successes for the K25 team, taking the Irish J24 national Championship and J24 Eastern titles and performing well in the J24 Worlds.

Commodore Breda Dillon presented the awards, and expressed thanks to both David Cullen of Euro Car Parks and Enda O'Coineen for their outstanding support to the K25 team.

The trophy 'Silver Fox' was awarded to the J24 Worlds Team. Derek Bothwell Championship Chairman accepted the trophy on behalf of the team and expressed his very sincere thanks to all members of the huge team that gave up so much of their time to bring this event to its excellent conclusion.

The 'Seaward Bell' - a junior trophy awarded for outstanding performance either at home or abroad was this year awarded to Cliff Waddilove and Robert Dickson for their achievement in qualifying to represent Ireland at the ISAF Youth Worlds, and their campaign at both the 420 Worlds in Valencia where they finished 3rd under 16yrs, and again sailed very consistently at the Junior Europeans in Pwllhei end of august. The pair are currently spending their Transition Year's studies in La Rochelle France, improving their French no doubt, and also enrolled in an intensive sail training programme with their 420. Robert's well renowned grandfather Roy Dickson and Sean's father Cliff accepted the award on their behalf.

Boat of the Year

Instructor of the Year

Volunteer of the Year