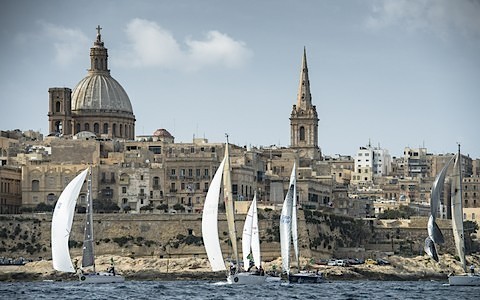 Commodore Brian Turvey presented a club burgee to the team representing HYC for the 2014 Middle Sea Race which commences on this Saturday 18th October in Valletta, Malta and will finish back there after a 606 mile non-stop race around Sicily. Team captain Darren Wright (pictured left below) and Colm Bermingham (right) will be joined by Howth sailors Kieran Jameson, Frank ('Buller') Dillon, Paul Walsh, Michael & David Wright, Rick De Nieve, Jonny White and Will Murray. 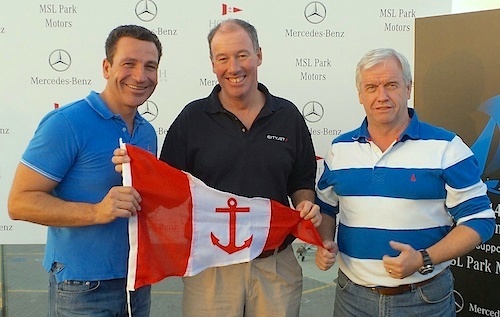 The team have chartered the Beneteau First 40 'Southern Child', a Bruce Farr-designed cruiser-racer which will race in the IRC 4 class with a rating of 1.083. A record breaking entry of 124 yachts across 4 principal classes (plus other divisions) will compete in this year's event, 25 more than the largest previous fleet of entrants. The race is a true challenge to skippers and crews who will have to be at their very best to cope with the often changeable and demanding conditions. Equally, the race is blessed with unsurpassed scenery with its course, taking competitors close to a number of islands, which form marks of the course. Ted Turner described the MSR as "the most beautiful race course in the world".

Fellow HYC sailor Laura Dillon will also be competing in the event aboard the Sparkman & Stephens 41 'Winsome'. The event can be followed on the live tracker at: www.rolexmiddlesearace.com/tracker/#pt and also on the 'Yellowbrick' mobile app available on Android and iPhone. 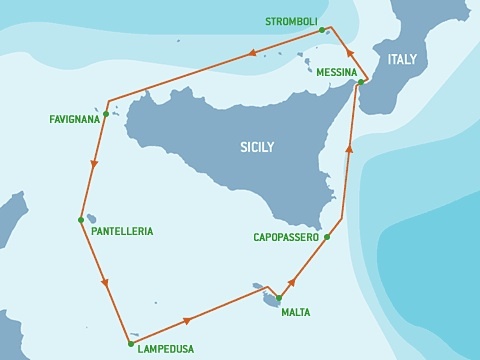