Eager Frostbiters get ready for the post-Christmas series in HYC 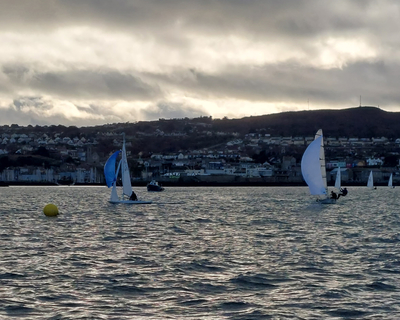 The annual New Year’s Day race bridges the gap between the two HYC Dinghy Frostbite series, and this year idyllic conditions welcomed those brave enough to shake off any cobwebs left over from celebrations the night before. 11 sailors who couldn’t resist getting afloat between the two series were determined to get 2023 off to a proper start! While the pre-Christmas series missed 3 weekends due to strong winds, and the races that did proceed did so in breezy conditions, the NYD race welcomed sailors with bright skies, a moderate breeze and mild temperatures.


Sailors from across the ILCA and PY fleets arrived down for a leisurely 11.55 first gun for the single race of the day. All fleets started together and got away cleanly, with the exception of Conor Murphy who was caught by an individual recall and returned to restart his race. Dan O’Connell led the ILCA 7s from the start, and Marco Sorgassi led the ILCA 6s (and even beat the remainder of the ILCA 7 fleet), while Charlie Keating won the ILCA 4 fleet. The PY fleet welcomed back Mike Evans’ RS800, but it was Daragh Sheridan’s RS Aero who took home first place in the handicap fleet, holding off the RS800 and Hugo Micka’s Fireball.


The fleet now looks forward to the Spring Series of the HYC Dinghy Frostbites, which runs each Sunday from 8th Jan to 5th March. The Spring Series will be capped off with the annual Round the Island race, where the club will welcome dinghies of all shapes and sizes from around the country to compete in the circumnavigation of Ireland’s Eye.


Entry to the HYC Dinghy Frostbite Spring Series is available here, and NOR & Entry for the Round the Island will be published very shortly.