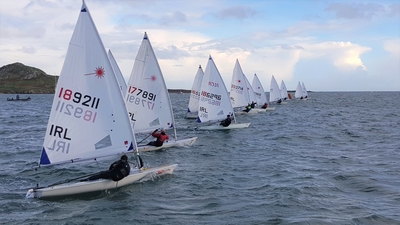 Unfortunately, the days of strong winds preceding the event did not abate sufficiently to allow the full spectrum of dinghies assembled to ultimately sail, with the Race Officer David Lovegrove making the hard decision to keep the Topper, ILCA 4, Feva and Optimist Regatta fleets on the hard. While this was a disappointing situation, moods were soon assuaged by the burgers and chips produced by the kitchen and enjoyed in the Light House.

This left the IDRA 14s, ILCAs 7 & 6 and the Optimist Main Fleet to set out and test their mettle on the high seas. After a short postponement, the first race was off with steady winds that decreased but kept the fleet on their toes with some sporting gusts. Throughout the second race, the wind quickly gained strength causing the Race Officer to abandon the last race by which time winds of 36 knots were being recorded on the Committee Coat.

In the IDRA fleet first place and the Wilkinson Cup was taken by Ryan Cairns and Orla Doogue (CYBC), with second place taken by Alan Carr and Sarah Robertson (SDC), with Christian Lorenz and Pat O’Kelly (CBYC) taking third place.

With the boats all de-rigged and sailors showered and in dry clothes, some very amiable time was spent in the warm and wind-free confines of the bar where bruises and capsize stories were compared.

Many thanks to Subsea Micropiles for sponsoring this event.