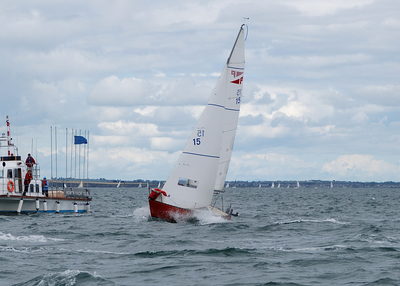 With their Autumn League win already secured before even going afloat for the last race, Trick or Treat, the Puppeteer 22 of Alan Pearson and Alan Blay, rounded out their Autumn League score with a third place before coming ashore to load their wheelbarrow with the trophies for first in their Class, best boat of the event and, along with their Team ‘TIT’ team-mates from Classes 3 and 4, Insider (S Mullaney) and Tiger (S. Harris), the Olympus Team Trophy.

After a blow-out put an end to the scheduled fifth day of racing, the sixth (and final) day’s racing produced perfect conditions to keep the competitors on the two course areas fully entertained under a beautiful blue sky that belied the late October date on the calendar.  The shifty southerly that fluctuated between 14 and 20 knots while oscillating frequently kept the tacticians fully involved while those entrusted with sheet grinding hoped that the next call for a tack or gybe might take a bit longer to arrive than the last one.

Although some of the Classes started the day with their winners already confirmed, all enjoyed a great day of racing that brought the extended HYC summer season to a close.  The course setting skills of Race Officers David Lovegrove (Offshore) and Derek Bothwell (Inshore) were both fully tested by the wind conditions but both succeeded in giving their charges full value, choosing course lengths that provided the competitors with more than enough justification for ‘adequate’ post-race rehydration therapy while the traditional earlier start on the last day allowed time for plenty of analysis of why the well-sailed boats always seem to be the fortunate ones.

On the Offshore Course, in Class 1 Snapshot (M&R Evans) wrapped up their event with a race win that saw them take first overall on both IRC and HPH with Lambay Rules (S Quinn) and Jeneral Lee (C&K Kavanagh) taking the runner-up slots on IRC and HPH respectively.  In Class 2, Maximus (P. Kyne) also did an IRC and HPH double, Impetuous (Noonan / Chambers) having to settle for second spot in both divisions.  In Whitesails Class 4, Tiger (S. Harris) was the star turn on IRC, never scoring worse than second but still only 2 points clear of Bite the Bullet (C. Bermingham) in the overall rankings.  On HPH, White Pearl (D Greene) took first place to give Malahide YC a top line place on the scoreboard, with Changeling (K Jameson) finishing as runner-up.  In Whitesails Cruisers 5, Demelza (Laudan / Ennis) was the runaway winner with a winning score of six wins, ahead of Voyager (J. Carton).  The larger HPH fleet in Cruisers 5 saw a close contest between Mary Ellen (O’Byrne/Finucane/Carty) and Joker’s Wild (Flood/ Greene) over the course of the series.  With Mary Ellen just two points ahead going into the final race, a win by Joker’s Wild would be enough to take the overall win if Mary Ellen was worse than second.  While Joker’s Wild secured their required victory by just two seconds, it was not enough when Mary Ellen bagged their required second to take the overall win.

On the Inshore Course, Stephen Mullaney’s Sigma 33, Insider, continued on their imperious way to take their sixth IRC race win and first overall by a 10-point margin from Conor Fogerty’s Silver Shamrock.   The HPH battle went to the wire with the all-Malahide battle between the Impala of the Club’s Cruiser Sailing Secretary Russell Camier and MYC’s K25 team, skippered by Sean Anglim in the J24 Billy Whizz.  Both were tied going into the last race and Kahera’s win with Billy Whizz second saw the Impala take overall victory by just one point from the fast-learning K25 squad.

The fifteen boat Howth 17 fleet saw one of the closest battles of the event with the final race victory of Erica (D Nixon) winning them first place overall on scratch by just 0.5 pts from Deilginis (Massey / Toomey / Kenny). Eileen (R. Macken) took first on handicap from Zaida (Carroll / Houlihan / Hurley).

Slipstream (Robert Marshall) flew the flag for Killyleagh YC in the Squib fleet and took first place on both scratch and handicap.  Howth YC’s club-owned Squib Tiger Roll, which enjoyed the crewing skills of a number of HYC sailors and ghouls over the series, took the runner-up slot on scratch while Cool Beans (T.O’Reilly) took second place on handicap.

The twenty-boat entry of the Puppeteer 22 Class gave them the honour of the biggest fleet but, despite the extent of their opposition, Trick or Treat were easy winners on scratch, discarding a third as their worst score.  After a close fought last race to decide who would be runner-up, Shiggi Shiggi (P&L McMahon) took the winning gun to secure second overall while No Strings (T Harvey) beat WeyHey (I. Dickson) to first spot on handicap.

The Taste of Racing sailors, on board HYC's fleet of J80s, enjoyed a perfect closing day under the sun and several have already signed up for regular spots on members' boats. Thanks goes to those members who skippered the fleet during the regatta.

The event was an outstanding success and officially concludes the Howth YC Summer season.  Thanks must go to sponsors Beshoff Motors and particularly to owner Jeremy Beshoff for being there every Saturday to award the prizes, to Event Chairman Gary Cullen, the race management team led by David Lovegrove, the results personnel, the marklayers and to the Club’s marina and hospitality staff for looking after both the boats and the sailors ashore.

After a break over the October Holiday Weekend, keelboat racing will resume with the 2022 Brass Monkeys event commencing on Sunday November 6th, all comers welcome and marina berths are available for visitors who want to continue to make the most of our extended Autumn weather. To enter, CLICK HERE