Ducks and drakes, snakes and ladders for Day 4 of Beshoff Motors Autumn League 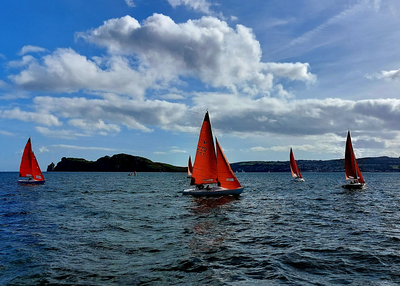 Saturday's weather might have been gorgeous from the shore, but fickle winds made for challenging racing on Day 4 of Beshoff Motors Autumn League. Read the reports by class below, and don't forget to visit the photo gallery for some great shots from the day...

Snakes and ladders in Class 1

Two windward-leeward races were held for day 4 of the Autumn League, in bright sunshine and tricky conditions for the second race and plenty of snakes and ladders going on. Snapshot is back in the overall lead in cruisers 1 IRC, after a good day on the water with a 1,2. Lambay Rules is still in the hunt, with a 3rd in the first race; having beaten Jeneral Lee by a second on corrected, to leave them two points behind Snapshot with 2 races to go. Ghost Raider picked up a jacket with a win in the second race. In HPH, Jeneral Lee is hunting down Snapshot with a 2,1 on the day, with Indian close behind. 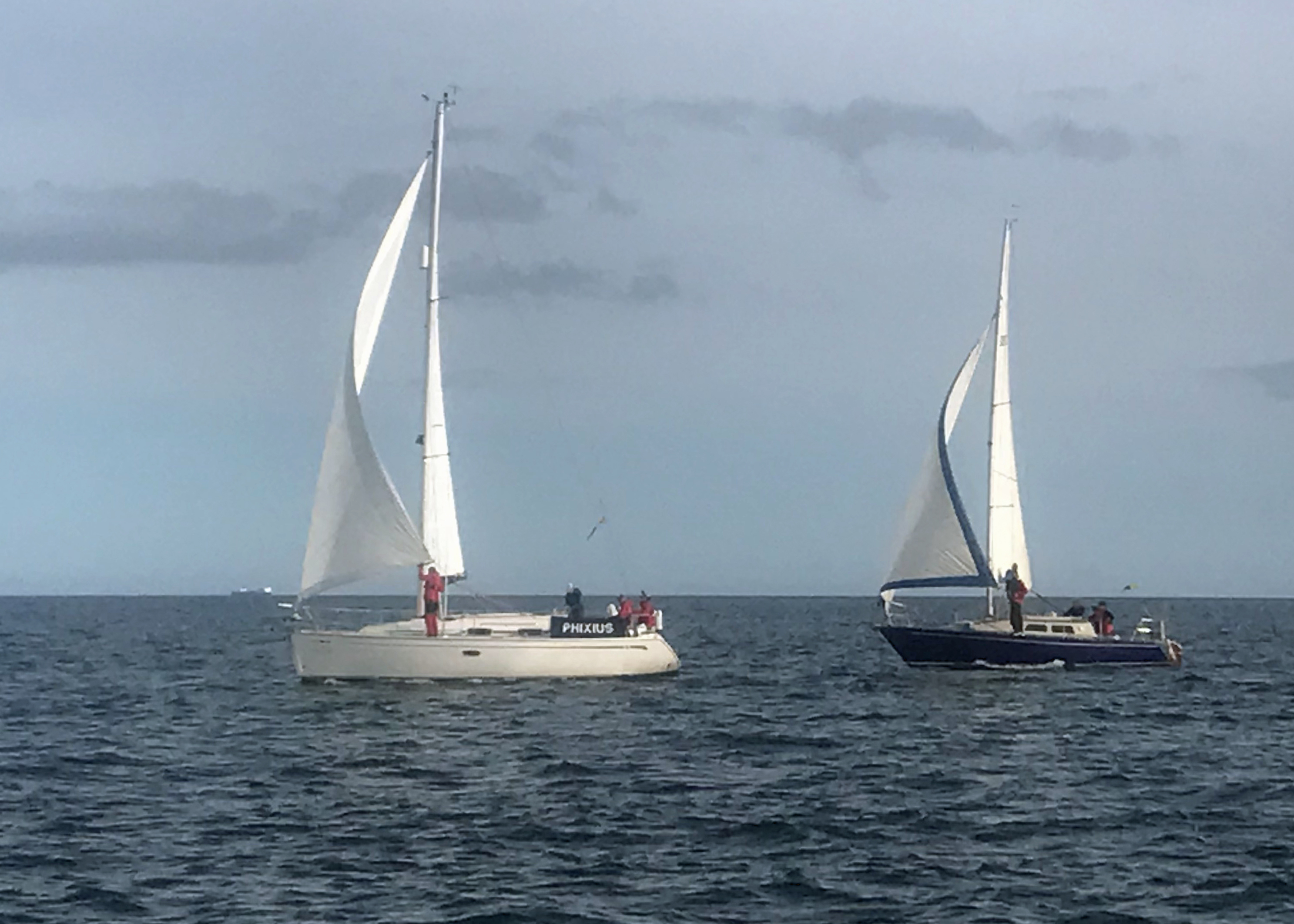 Impetuous hits the front for Class 2

With a light west/southwest wind forecast, and an ebb tide running, the second day of windward-leeward races was shaping up to be another cracker!

With all entries lining up for the start of race one, the strong ebb tide and light breeze made for plenty of drama as the start gun was counted down. Both Dux and Xebec got called OCS, leaving Maximus and No Excuse a clear path to the weather mark, followed by Viking. As Impetuous ducked all three, she made her way to the right-hand side of the beat to join Pepperbox on a long lee-bowed tack to the weather mark. It paid off, and Impetuous took the lead and was to hold it to the finish. No Excuse battled Maximus to take 2nd place.

With the wind backing southerly, the Race Officer laid a new weather mark in the vicinity of Ireland's Eye, and race 2 got under way. All clear this time, a relief no doubt for those OCS boats from race 1.

With the wind now shifting 20+ degrees in both directions, Impetuous was revelling in the conditions and got to the weather mark ahead of a chasing pack. On the run to the leeward gate, Xebec and Pepperbox were keeping the Corby honest. With the wind starting to freshen and the sun now shining, Impetuous was lining herself up for the 2nd gun of the afternoon, with Xebec coming home in 2nd and Maximus 3rd.

With six races now complete, Impetuous now leads IRC from Maximus by one point, with Dux holding third spot. Maximus and Impetuous are equal on points in HPH.

All to play for in the last two weekends of racing. Will the weather gods go light or heavy? This could have a bearing on the outcome of this series! 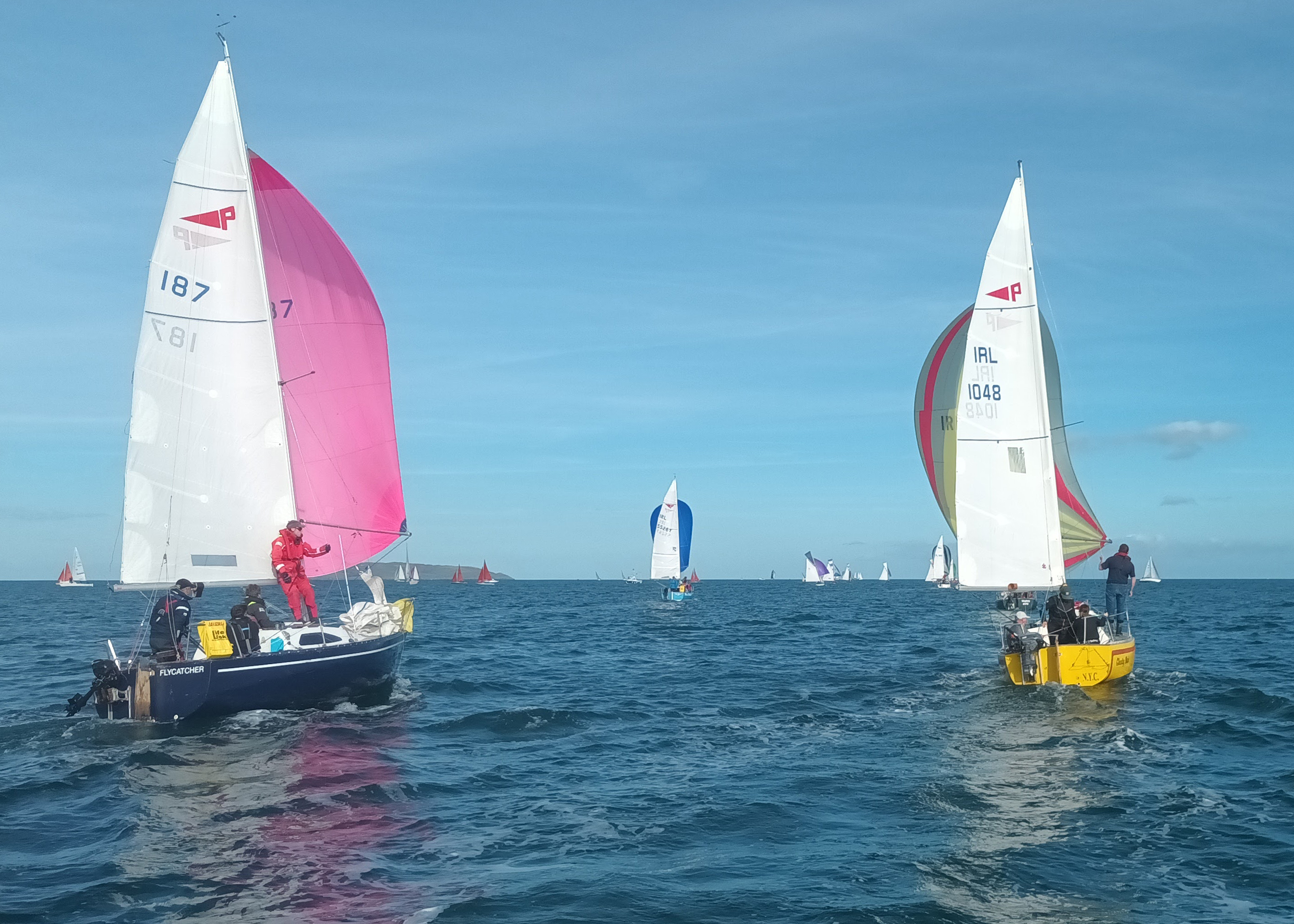 Week 4 offered two windward leeward courses with a more pleasant level of breeze, but with that came shifty conditions.

Race 5 of the series offered plenty of excitement on the line, with the fleet bunching at the committee boat and one boat OCS. This was Pepsi, who had been just one point off HPH overall after their race win last week, but they did go back and re-cross the line. After a short sharp race at just 27 minutes (the finish line was being laid just as the Howth 17s started their race), Insider was 1st on IRC; but after missing some races, Vincent Gaffney’s Alliance was right on the heels of Insider in 2nd. Malahide entry Buster finished out the podium in 3rd for Patrick Higginbotham’s best result of the series -- only 2 seconds ahead of their clubmate, Kahera. Buster also took 1st on HPH from Shenanigans and Billy Whizz, to make it a complete podium of Malahide boats.

Race 6 saw another crowded start line, again with Shenanigans having to take evasive action and zig zag their way through the fleet to avoid collision. The breeze had started to shift more for this race and Billy Whizz rounded the windward mark in 1st, having gone the farthest left up the beat; but they were followed closely by Insider and Alliance. At the leeward gate, Billy Whizz rounded the starboard mark -- with Alliance on their transom -- whilst Insider went for the port mark. Traffic management for this beat was key, with all of the one design fleet running downwind. The whole fleet went left; except for Alliance, who read the shifts brilliantly to go right and round the windward mark in 1st ahead of Insider, after a 30-degree shift. They stayed in this order, with Alliance getting 1st on IRC from Insider, and Silver Shamrock in 3rd. On HPH, it was also Alliance in 1st; with Billy Whizz and Rush Sailing Club’s Juvenile Delinquent in 3rd.

Overall, Insider leads on IRC; but in HPH, Billy Whizz and Kahera are on joint points to make the last two weeks interesting. 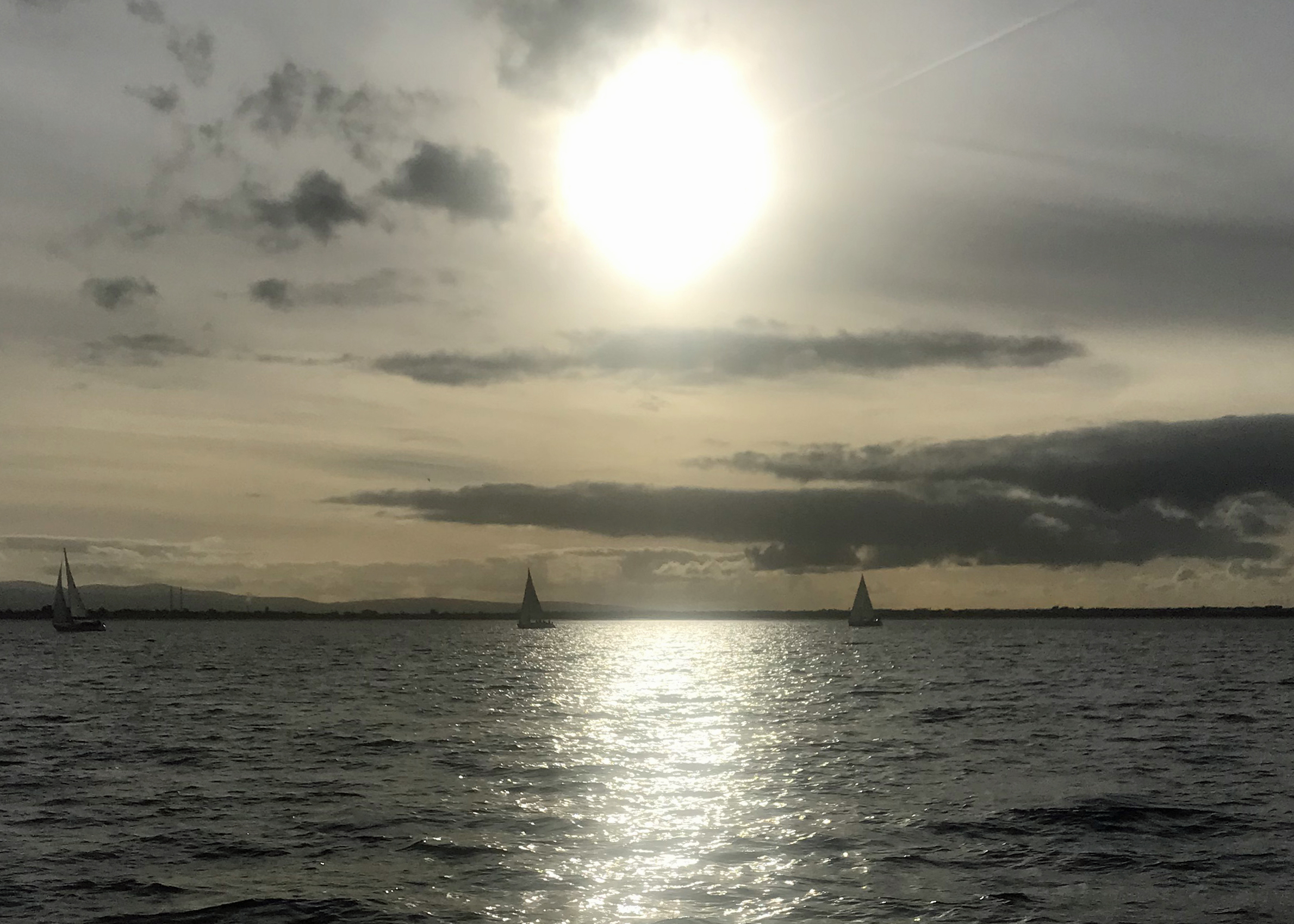 Brace of Windward Leewards provide Pups with a day to remember.

With two races scheduled, and the memory of the previous Saturday’s taxing conditions still to be erased, the Pup fleet was mightily relieved to see the sunshine, flat sea, and the nice westerly breeze that wafted them out to the start line on October 8th.

Race Officer Robert Orr’s VHF briefing on the ‘changeable’ conditions that the Race Committee had noted while they set up the course provided the first hint that maybe there could be worse things than the conditions ‘enjoyed’ the previous week. The oscillating wind, combined with the forecast shift from southwest to southerly, and the ebb tide across the course, had the makings of a challenging day for both race management and racers -- and so it proved to be. To ensure that at least one race could be completed if the breeze disappeared, the course for the first one was kept short and HoneyBadger (G. May) -- which has been steadily improving over the series -- hit the front at the first mark, and then led all the way to the finish. The leeward gate at the bottom of the first run sorted out the rest of the places, and the wind shift on the second beat ensured there was little change in the leading group after that; the ever-consistent Trick or Treat (A Blay / A Pearson) finishing second, ahead of Shiggi Shiggi (P & L McMahon).

The wind moved further south for the second race, and began to play ducks and drakes with the fleet. With the course realigned and extended, everything was looking good for a tight race as the starting sequence ran down. The course was now to leeward of Ireland’s Eye, and the wind alternately coming around and over that large lump of rock saw puffs, holes, and patches of different direction gliding down the windward leg, alternately raising and dashing the hopes of different crews. Just as the starting gun went, the boats at the Committee Vessel end found themselves becalmed, while those further down the line romped away, before then finding themselves slowing while those who had suffered earlier got a chance on the escalator.  As the race played out, there was lots of place changing before the leading boats arrived in a group at the leeward gate for the last time with just feet, and a few Squibs and Howth 17s, separating them. With only a 400-metre beat to the finish to sort out the podium places, and lots of traffic from other fleets to weave through to get there, Shiggi Shiggi and HoneyBadger rounded first and second ahead of Yellow Peril (Murphy / Costello) and Trick or Treat. In as tight a finish as one could imagine, Shiggi Shiggi took the gun by 13 seconds from Trick or Treat, which sailed a great final leg to add another second place to their overall score. The first five boats were covered by just 25 seconds, just four seconds separating second from fourth.

On HPH, Flycatcher (M.McKeon) and Mr Punch (NiBhraonain / Wilson) took a win apiece. In the first race of the day the minor placings were taken by No Strings (T Harvey) and Gepetto (O’Reilly / McDyer), and in the second race by Snowgoose (S. Robertson) and No Strings.

With just two of the planned eight races left to sail, Trick or Treat enjoys a huge lead in the Scratch results with three firsts, two seconds and a third in the bag, giving them an eight point margin over three boats that are tied on fifteen points – Harlequin (D Clarke), Shiggi Shiggi and Yellow Peril. On HPH, No Strings and Ghosty Ned (D Harkin) are joint first, just two points ahead of WeyHey (I. Dickson). 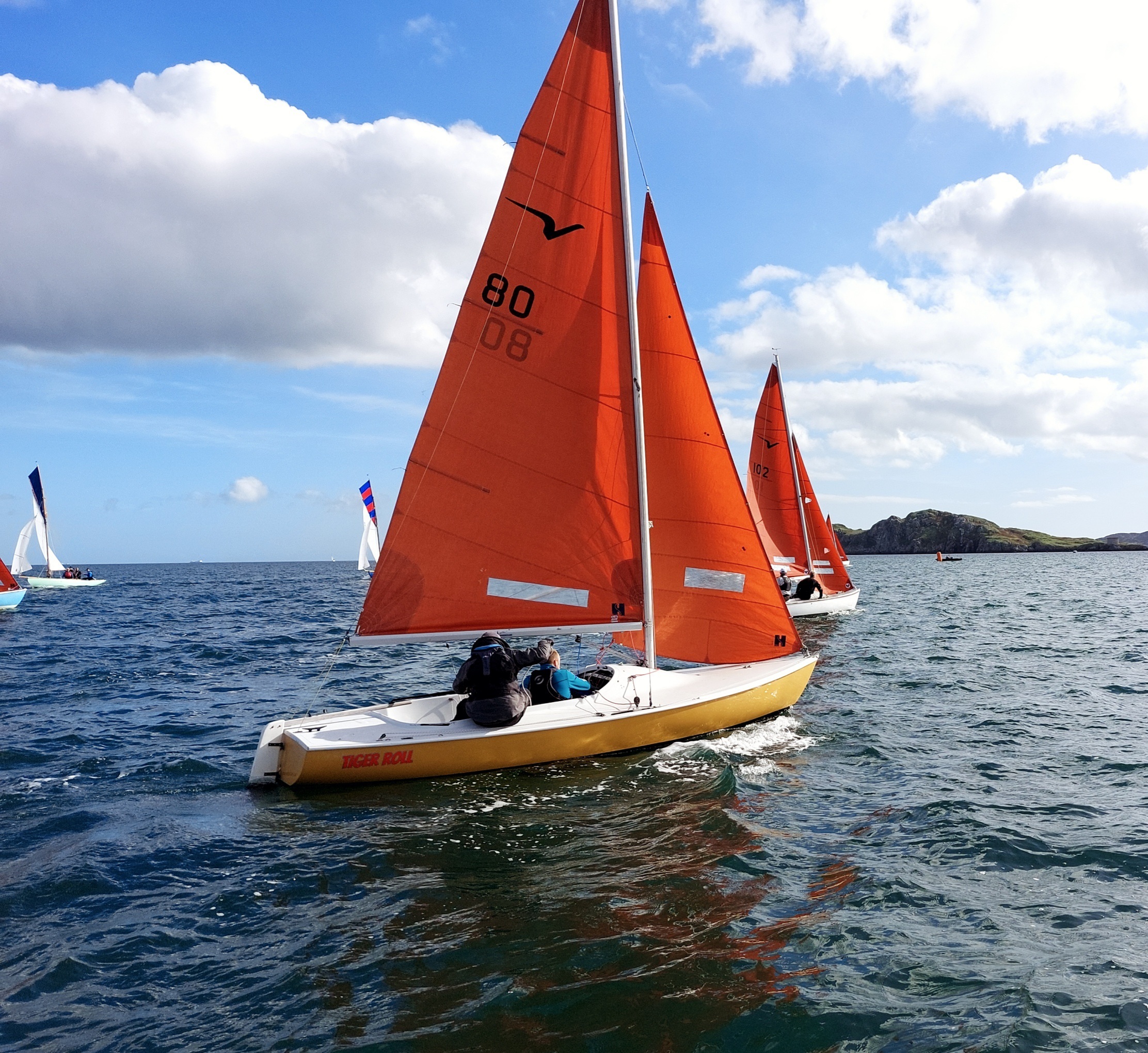 Squibs shout, shout, and let it all out

All seven Squibs rocked up to a course so short that an Optimist brat would have balked; but with the wind forecast to veer severely over the afternoon, the race committee were up against it to get all four fleets around it, before the wind direction changed drastically.

By the time the Squib start gun went, the wind had started to veer again. The fleet, sticking to their pre-race plan to sail to the shift, may not have picked up it had already kicked in during the pre-start tussle. Late over the line and suspecting a shift, Cool Beans immediately tacked onto port and was lifted all the way to the first windward mark. The rest of the fleet, having overshot the lay line on the left side of the course, charged to the mark, with Tiger Roll rounding first well ahead of Cool Beans. Both opted to go left downwind to avoid the next fleet. The rest of the pack went right. Fergus & Tom in Tiger Roll were far enough ahead that they were faced with having to sail around the Howth 17’s 200m start line. By the time the rest of the pack reached it, the 17’s were well underway; so, they opted to sail straight through to the starboard gate mark... only to find themselves bunched with some of the larger classes at the rounding, with Chatterbox emerging the victor. By the 2nd windward mark, Chatterbox had established its lead, with Cool Beans now chasing for 2nd. The mark boat raced back to drop a finishing mark as the Squibs approached the final gate. Chatterbox crossed firs,t with the first four boats each finishing 20 seconds apart.

With the course extended and moved considerably to the left, race 2 got underway. Tiger Roll took the first windward mark. On the lay line, with the tide pushing them onto the mark, Cool Beans chose to crack the jib off and shoot the mark -- much to the discomfort of its nearest neighbours, Tears for Fears and Slip Stream.  From there, Tears and Beans hopped and skipped to the leeward mark, each taking its turn to lead the other.  This courtship abruptly ended at the leeward mark, when they met a group of Class 3’s who didn’t know or care that they needed to give room to other fleets racing. “Shout, shout, let it all out. These are the things I can do without. Come on, I'm talking to you, come on,” Tears for Fears bellowed (may or may not have happened). Cool Beans squeezed around, but Tears got swallowed up in bad air from the larger boats and fell back.

Tiger, doing what tiggers do best, continued to extend its lead at the front. Meanwhile, Slipstream and Chatterbox did battle on the left side of the final beat, with Slipstream winning out. Chatterbox's prize was to meet Cool Beans on its approach to the windward. Cool Beans botched an attempt to tack under Chatterbox on the lay line, only to land themselves with a penalty. On the final windward leg, Chatterbox made a second charge to catch Slipstream, only to finish 8 seconds behind. The winners -- Tiger Roll’s Fergus and Tom -- were already halfway back to the Club, eyeing up their victory drink.